London’s department stores stock everything you could ever need, but the most famous have retained their unique identities. 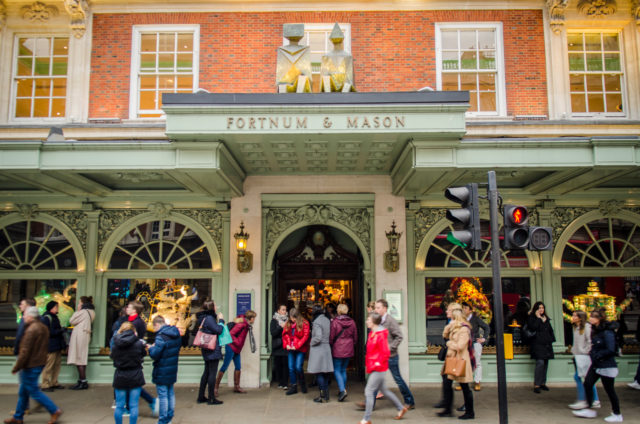 In 1707, Fortnum & Mason began as a purveyor of royal souvenirs. Well, sort of – William Fortnum was a footman in the court of Queen Anne, and among her many whims was an insistence upon new candles each evening. Fortnum sold the half-used ones, giving him funds to open a shop with his landlord, Hugh Mason.

Their enterprise expanded, benefiting from its royal connections. Fortnum & Mason became known for its ready-to-eat luxury victuals: the jewel in its crown was the iconic travellers’ hamper, which would be popular with Victorian society. At the Epsom Derby, Charles Dickens wrote: “Look where I will, I see Fortnum & Mason. All the hampers fly wide open and the green downs burst into a blossom of lobster salad!”

Don’t miss: The famous clock on the shop’s frontage. The same foundry that crafted Big Ben made its bells. Once an hour, on the hour, two doors open to reveal Messers Fortnum and Mason in situ again. Fortnum is holding a candle, naturally.

Don’t leave without: A hamper, of course. There are plenty of pre-packed options, but for a real treat, fill your own. Essential additions? Stilton nestled in a ceramic pot, handmade rose and violet creams and a jar of honey from Fortnum’s colony of bees are essential additions. The flavour of the honey changes depending on where the bees have ventured – some head to Buckingham Palace’s gardens. 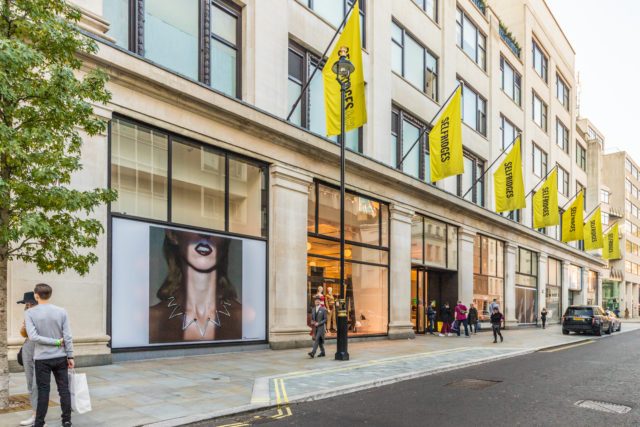 Shopping, thought the American Harry Gordon Selfridge, should be like a trip to the theatre. His retail empire, which opened in 1909, introduced the concept of window displays and he seized the opportunity to create impressive works of art. To this day, Selfridges’ displays are a spectacle to behold.

It didn’t take long for Selfridges to become a cultural phenomenon in London. Its ringleader became a glittering member of the city’s artistic elite, as the shop featured exhibitions, performances and much more. Assistants were trained in ‘Voice Culture and Personal Magnetism’, further adding to the shop’s allure. With Selfridge – the P.T. Barnum of retail – at its helm, it became a mecca for West End stars.

Don’t miss: A trip to an actual theatre, a Stevie Wonder gig and a rooftop boating lake – Selfridges has housed all of the above in a bid to celebrate the cultural fibre of this wonderful world capital.

Don’t leave without: A piece from one of Selfridges’ limited-edition designer collaborations. London-centric and just the right side of kitsch, you’ll be sure to find a piece that brings the best of the city back home. 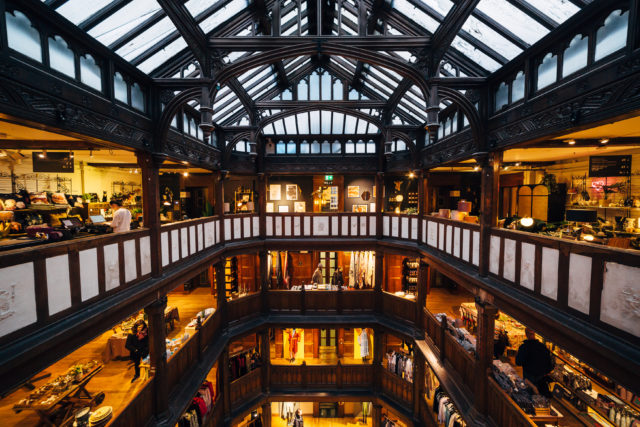 When Arthur Lasenby Liberty opened his doors in 1875, he took London on a grand journey through the Far East and beyond. Laden with beautiful fabrics and objets d’art, Liberty helped to pioneer the Art Nouveau movement, ushering in a design revolution.

Liberty began to join forces with designers to produce distinctive textiles and pre-Raphaelite styles. Oscar Wilde was among the shop’s earliest fans, proclaiming: “Liberty is the chosen resort of the artistic shopper.” In 1924 the current shop opened, and though its distinctive frontispiece looks straight out of Tudor England, it was designed and built on spec. They used timber from two ancient battleships: a fitting and imposing vessel for the adventure it promised.

Don’t miss: A menagerie of carved wooden animals hidden throughout the third atrium, a series of glass paintings in the panelling, taken from the ships’ captains’ quarters, and the gilded weathervane, a replica of the Mayflower. You’ll be hard-pressed to miss Liberty’s most famous sight – its colossal chandelier is said to be the longest in Europe.

Don’t leave without: A ream of William Morris-inspired fabric from the world-famous haberdashery department. Not feeling quite so hands-on? The selection of rugs, from the bazaars of Peshawar and beyond, is arguably the finest in the city. 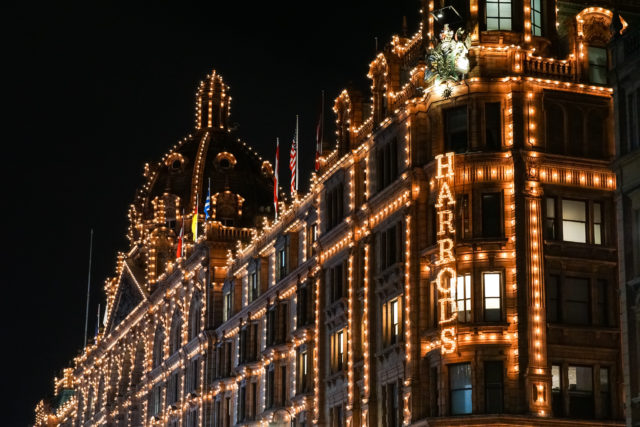 Is there anything more British than Harrods? What began as a humble grocery store was reborn after the Great Exhibition of 1851. In 1883 a fire destroyed the shop and all its stock three weeks before Christmas. Despite this, Harrods still managed to fulfil all its orders. Its reputation for exceeding expectations was established – a tradition that continues today across 330 departments.

Perhaps most whimsical of all was the Pet Kingdom, which closed in 2014. Before the Endangered Species Act of 1976, customers could buy nearly any animal there – including, in the case of playwright Noël Coward, an alligator. When Ronald Reagan phoned the shop in search of a baby elephant for a Republican party rally, his request was met with Harrods’ legendary agreeability: “Would that be African or Indian, sir?”

Don’t leave without: A teddy bear from the famous toy department. It was from this menagerie that A.A. Milne bought the toy bear that would become the inspiration for Winnie the Pooh. 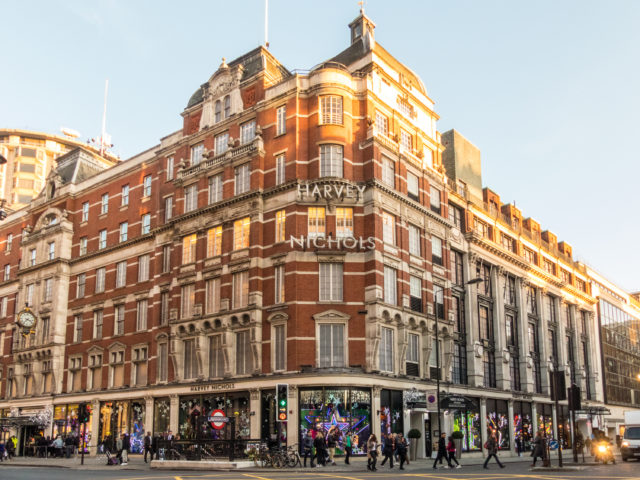 The Harvey Nichols flagship is synonymous with haute couture, but when it first opened in 1831, it was just a small linen shop in Knightsbridge. It didn’t take long, however, for the shop to expand. By 1841, founder Benjamin Harvey had brought in James Nichols as his second-in-command. From its earliest days, it was the place to go for cutting-edge clothing. By the 1980s, Harvey Nichols found itself influencing the designers whose wares it stocked. The shop was instrumental in encouraging designers like Max Mara to release collections across a variety of departments, rather than a niche output.

Don’t miss: The Fifth Floor Terrace & Bar, perfect for a spot of rejuvenation mid-shop. It was refurbished in the 1990s, so you won’t be able to sit at the table that Princess Diana often reserved, but you can certainly channel Patsy and Eddie of Absolutely Fabulous fame.

Don’t leave without: A trip to the beauty rooms, where a team of experts is waiting to help you look and feel your best. Try the Red Carpet package, including an LED rejuvenation facial, mani-pedi and blow-dry. You’ll be ready for whatever the evening brings.