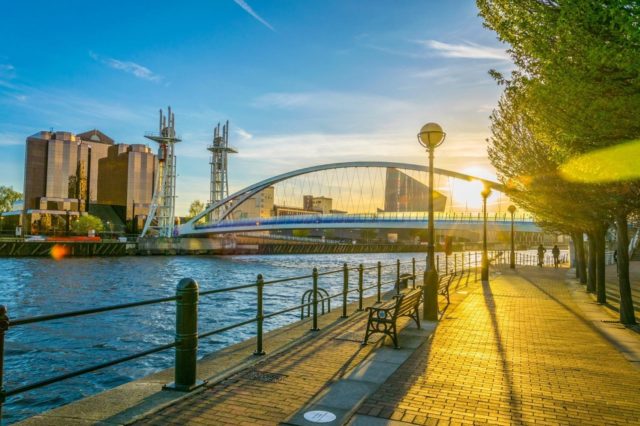 Energetic, diverse and proudly individual, Manchester is a city with true character and makes for a perfect city break.

First finding global fame as the heart of the Industrial Revolution, Manchester has a proud history in science, politics, music, arts and sport. This is the city where the atom was first split, where the world’s first passenger railway was opened, and where the modern computer was invented. It’s where bands like The Smiths, Oasis, Joy Division and The Stone Roses were inspired to write music that moved the world. The birthplace of modern vegetarianism, atomic theory, women’s suffrage and even thermodynamics. It’s where Emmeline Pankhurst, Alan Turing, LS Lowry and Anthony Burgess called home.

Exploring Manchester city centre you’ll find it packed with remnants of this history and with unique and independent restaurants, bars, shops, museums, galleries and hotels, all gathered in districts with their own distinct personalities. So follow our itinerary and find the Manchester that speaks to you.

Get to know the city you have just arrived in, at the heart of England’s Northwest, with a guided tour of Manchester City Centre which starts start from outside Manchester Central Library daily. Finish your walking tour at the Science and Industry Museum for a fun-filled and interactive couple of hours before lunch. Located on the site of the 1830 Manchester to Liverpool railway line – the world’s first passenger railway – SIM is one of the best cultural attractions in the region. Live demonstrations, costumed historical characters and guided tours will help you discover why Manchester is known as the ‘city of firsts’.

Now you’ve worked up an appetite, why not pop into Kala for lunch? From the team behind several fantastic bistros across the Northwest, Gary Usher’s Kala offers humble British comfort food within a stunning space on King Street. Try the braised featherblade of beef with a side of truffle and parmesan chips.

Fully sated, head over to the Northern Quarter, a hipster haven that’s fiercely independent. It’s overflowing with street art, galleries, cafés, bars, restaurants and boutiques. Don’t miss the Manchester Craft and Design Centre, where you can pick up something bespoke within the unique surroundings of a Victorian market building, or the iconic Afflecks, an Aladdin’s cave of unique traders, housed in one of the city’s best-loved shopping emporiums.

Put on your coolest threads and take a trip to Canal Street. The beacon of celebration in the city, the Gay Village is a must for any visitor to Manchester. Located along and around Canal Street, the Village is both party central and a living piece of social history. Start your night with a bite to eat at No 1 Canal Street, the first of many stops on a Canal Street night out, which will invariably also include Via, The Molly House, The Brewers, The Goose and Cruz 101 if you’re up for some late-night dancing.

Start your day with a visit to Salford Quays. A unique waterfront location adjacent to MediaCityUK – where you’ll find the BBC and ITV – Salford Quays is home to the Lowry arts centre, one of the region’s top theatres and art centres. Here you can discover the world’s largest public collection of the paintings and drawings of the enigmatic LS Lowry, while the visually striking Imperial War Museum North is located opposite.

If heritage is more your thing Ordsall Hall is located a short walk from the Quays. Here you can take a tour around a fascinating Elizabethan black and white half-timbered manor house built over 800 years ago that has alleged links to Guy Fawkes.

Back in the city centre, grab a spot of lunch at Rudy’s, the Neapolitan pizza joint that’s consistently ranked best pizza in the UK, then pop into  John Rylands Library. The library dates back to 1890 and is certainly one of the most impressive buildings. Visitors have the chance to see the oldest known piece of the New Testament, the St John fragment. Later, take a tour of the ‘theatre of dreams’ at Old Trafford Football Ground, home to Manchester United. Go behind the scenes of one of the world’s most famous sporting venues, see the trophy cabinet and visit the changing rooms. Football fanatics can continue their obsession at the National Football Museum and delve into the social history and culture of the much-loved sport.

Time for a splurge? Visit Mana for dinner. Owned by chef Simon Martin, Mana is Manchester’s first Michelin star restaurant since 1977. Serving a reservation-only, multiple course menu, the restaurant champions British produce whilst taking inspiration from other cultures. Afterwards, enjoy the lively bar scene in and around Ancoats, consistently voted one of the hippest neighbourhoods in the UK.

Time for some fresh air and a visit to one of the best new attractions to have recently opened. RHS Garden Bridgewater is a new 154-acre garden, set within the lost historic grounds at Worsley New Hall in Salford. It features one of the UK’s biggest Walled Gardens, a Kitchen Garden, orchards and a Chinese Garden amongst other spaces. It’s a plant-lovers paradise.

Next, head to intu Trafford Centre and grab a bite to eat in one of the 60 restaurants and bars within The Orient. Enjoy an hour shopping while you’re there. Alternatively, visit one of The Trafford Centre’s other attractions such as Legoland Discovery. Then swing by HOME arts centre where you can take in an exhibition, watch a film, see a show, or just hang out and people watch from the glass-paned café bar before popping into nearby Manchester Gin Distillery for a pre-dinner cocktail.

Finish your trip to Manchester’s Chinatown, the second largest in the UK, where you’re guaranteed a wide choice of restaurants. Don’t miss some authentic Cantonese flavours at Yang Sing. Five floors of colourful decor are home to an extensive menu of some of the best Chinese food in the city. Be sure to try the dim sum.

See the city on two wheels

Explore Manchester on a unique, British made Pashley bicycle from Didsbury Bicycle Hire. The bikes are delivered to you, to make life a whole lot easier. You can combine the rental with packages such as the champagne afternoon tea picnic hampers with vintage china tea sets. Everything you need will be packaged up into a wooden cargo crate for easy transportation.