London is famous for embracing every delicious food fad going, but there are still some centuries-old restaurants where you won’t find a bao bun or a cauliflower-crust pizza. So, read on if you want to wine and dine like it’s 1799…

While the capital cannot claim the world’s oldest restaurant as its own (that honour goes to Madrid’s Sobrino de Botín, in operation since 1725), Rules remains an opulent time capsule that probably hasn’t changed much since it opened in 1798, when Napoleon was in his prime. In fact, it’s had just three owners since.

Its clientele list reads like a Who’s Who of British history: Charlie Chaplin, Charles Dickens, Lillie Langtry and HG Wells all frequented this plush, picture-strewn restaurant. The menu specialises in game from Rules’ own estate in the High Pennines, as well as oysters, pies and puddings. You’ll have missed out on grouse, however, as the shooting season ended on 10 December.

So why not start instead with Devon smoked eel followed by breast of pheasant, bacon, cabbage and bread sauce? If there’s room left, finish with apple and blackcurrant crumble and custard. You’ll find Rules in the heart of Theatreland, so you could catch The Mousetrap while you’re there. It’s not quite as old, but nevertheless, Agatha Christie’s murder mystery has been a West End stalwart since 1952. www.rules.co.uk 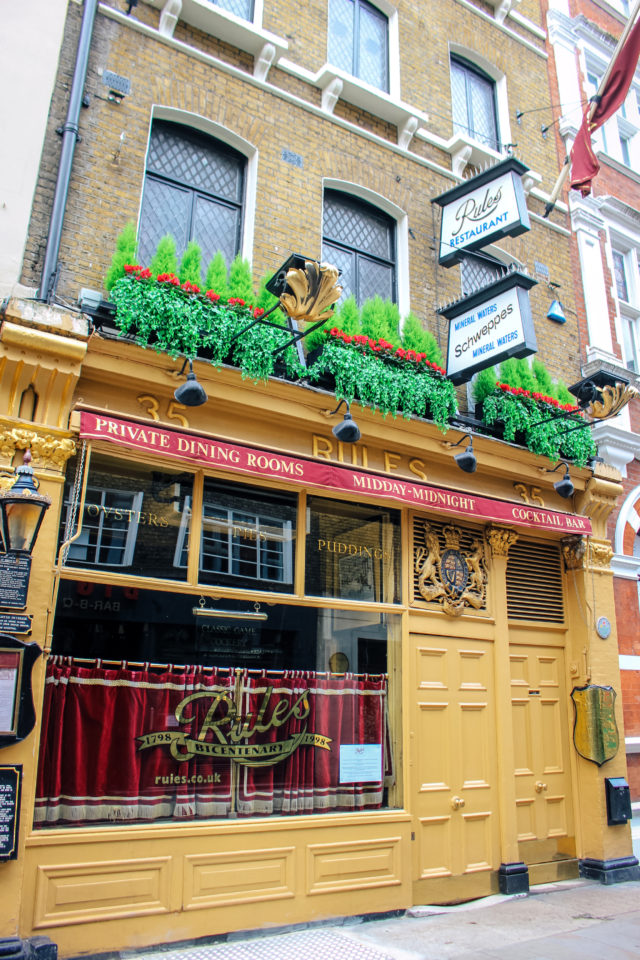 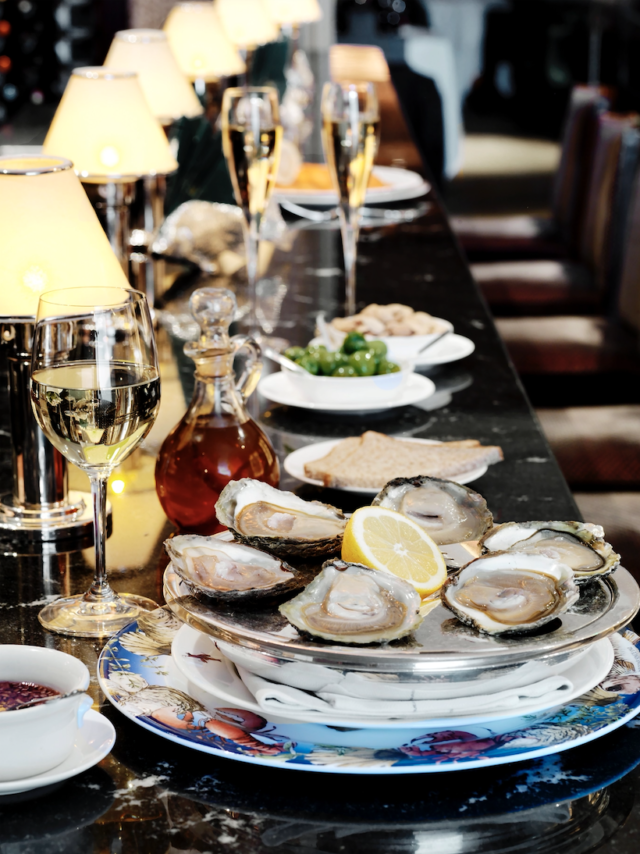 London has many fine-dining seafood restaurants, though it would be fairer to call them institutions. Bentley’s Oyster Bar & Grill has been here since 1916, Scott’s started out as an oyster warehouse in 1851 and J. Sheekey has been going strong since 1896. But Wiltons started out as a shellfish stall in 1742, so it’s probably up there as London’s oldest seafood restaurant. It’s arguably the best too, but it has had close to 300 years to get things right.

Its oysters, the main attraction, are served on a silver platter, shucked and glistening on crushed ice. Choose from six types, including Rockefellers and the very British-sounding Beau Brummells (you can see a statue of this Regency dandy – not the oyster – on the pavement outside, clutching his top hat and cane). Lovers of caviar will find only the best is served here – Beluga and Royal Belgian Oscietra – alongside buckwheat blinis and sour cream. Wild Scottish smoked salmon, dressed crab and potted shrimps are also on the menu, though meat eaters aren’t neglected.

Roast joints of the day arrive on a carving trolley, while the hefty mixed grill includes beef fillet, lamb cutlet and kidneys, bacon and black pudding. If you are still hungry (though you won’t be), round off your meal with some old-school anchovies on toast, or perhaps a more palate-cleansing blood orange sorbet. wiltons.co.uk

The Ivy flung open its doors in 1917, first as an unlicensed Italian café before becoming a fully-fledged restaurant in 1929. It enjoyed a huge resurgence in the 1990s when it was taken over by Jeremy King and Chris Corbin, the West End legends behind Scott’s and J. Sheekey. With last orders for food at 11pm, it attracted Theatreland’s leading movers and shakers, many of who had probably just taken their final curtain call. It’s still the same today, so try to play it cool if so-and-so is sitting at the next table. The food is classy comfort food: think haddock, chips and mushy peas or shepherd’s pie with a cute bottle of Heinz ketchup on the side. It’s cheering, welcoming and worthy of a Bafta. the-ivy.co.uk

What is Britain’s favourite national dish? Roast beef and Yorkshire puddings; bangers and mash; steak and kidney pie? No, they were all beaten by chicken tikka masala, a westernised Indian dish ‘invented’ by Glasgow chef Ali Ahmed Aslam in 1964. He died in 2022 but the nation’s love for Indian food is long and enduring.

Veeraswamy has been serving top-notch Indian food since 1926, when Edward Palmer, the grandson of an Indian princess and an English army general, opened his restaurant off Regent Street. Its interior is seriously opulent, evoking a 1920s Maharaja’s palace with its Indian Art Nouveau touches. Think handmade Venetian-style chandeliers, teak tables, hand-woven carpets and a glittering silver ceiling.

Cast your eyes away and look at the menu, which is a mix of traditional and contemporary Indian dishes, with many cooked in tandoor clay ovens. Try the Patiala lamb shank, slow-cooked for six hours in a marrow sauce, seabass griddled in banana leaf or a Goan roast duck vindaloo. The vegetarian menu is equally enticing with a homemade organic paneer roulade in a rich tomato curry, or a fruity pineapple curry. The weekend menu is a cheaper chance to experience Michelin-starred food. It includes Sri Lankan grilled turbot, prawns and roasted aubergine in a pandam leaf-infused curry as well as Malai tandoori breast of poussin (two courses for £36, three at £40). You’ll surely enjoy it as much as Veeraswamy’s past diners did, Churchill, Nehru and Gandhi among them. www.veeraswamy.com 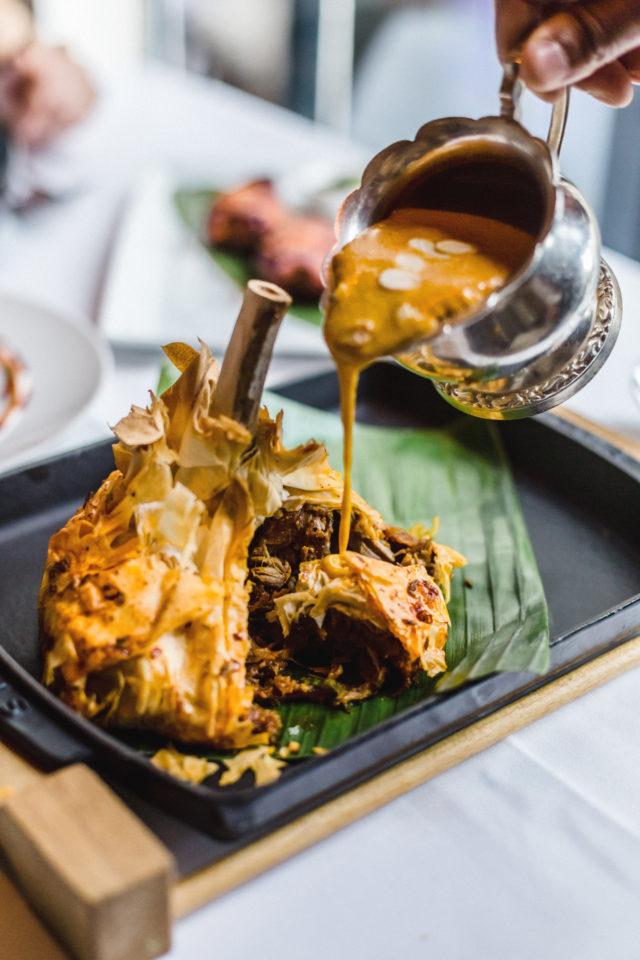 The capital’s first Chinese restaurant opened on Glasshouse Street in 1909. It’s long since been demolished but there are other restaurants with rich histories. Mr Chow, an elegant arch-ceilinged restaurant in Knightsbridge, opened in the Swinging Sixties, offering authentic Beijing cuisine served by Italian waiters, or ‘performers’ as owner Michael Chow described them. Mingling food, art and high society, the atmosphere was theatrical, with chefs making Beijing noodles by hand as part of the nightly entertainment.

Chow was a huge art lover who was immortalised in portraits by Andy Warhol, Jean-Michel Basquiat and David Hockney, so you’ll see lots of nostalgic images on the walls and feel like you’re dining in an art gallery. Dishes include Beijing chicken with walnuts, fresh live stone crab folded into a cloud of egg white and those famous handmade Mr Chow noodles. There are plenty of set menu options too and family-style meals for the whole table if you want to taste a bit of everything. www.mrchow.com

Wong Kei in Wardour Street isn’t quite as old as the much more upmarket Mr Chow, but it has been around for decades and is a Chinatown institution. I ate here as a child (so it must be old) and it hasn’t changed much at all since the Eighties – the portions are still huge; the prices great value (less than £10 for a filling meal) and it still seemingly never shuts. The restaurant is vast with five floors packed with communal tables. There is almost everything on the menu, from a basic chicken chow mein or beef with ginger and spring onions to stuffed bitter melon and meat in black bean sauce or deep-fried intestine. The service is notorious for being sharp and swift, but you do get a pot of Chinese tea, whether you ask for it or not, to make up for it. Don’t you dare try to pay by card, though, as it’s a cash-only restaurant. There’s no website either.

For a true taste of the old East End, head to M. Manze on Tower Bridge Road. The family-run restaurant still retains its original green, cream and pink floral tiles from 1902 and the tables are topped with marble. Sit down and order from the menu, which is short and sweet: eels, pies and mash. Eels cooked in gelatine were a common worker’s meal in the ‘olden days’ as they were one of the few forms of fish that could survive in the heavily polluted Thames. They’re served here, stewed or jellied, with green liquor, a parsley sauce made with eel stock. The traditional pies have shortcrust pastry on the top and suet on the bottom, and there are vegan versions too. Finish with a bowl of homemade ice cream. The restaurant is currently only open in the evenings so check in advance. www.manze.co.uk

previous
What's on at the Museum of London Docklands?
next
7 ways to celebrate LGBT+ History Month in London