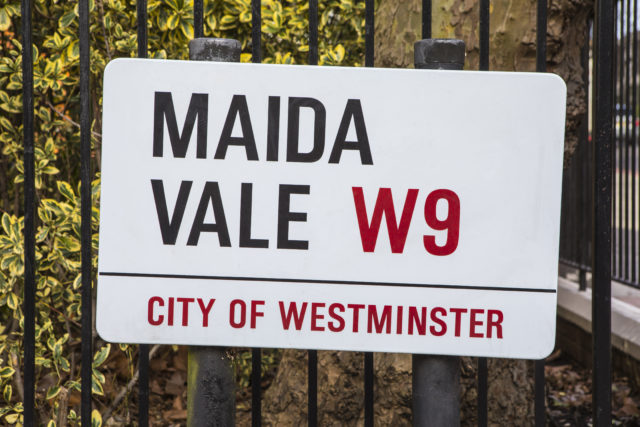 Just north of Paddington and west of St. John’s Wood, Maida Vale is an affluent district of west London that is named after the Italian town of Maida in Calabria, where the British won a victory over Napoleon in 1806.

Led by Sir John Stuart (later to become Count of Maida), 5,000 British troops defeated an even larger number of the French in battle. There was once a pub in the area that was named after this victory called The Hero of Maida and hence the district was named. Welcome to our guide to the area of Maida Vale.

The Hero of Maida may be long gone, but there are many other charming pubs in the area. The Waterway, perched on the banks of the canal, is a bistro-style gastropub serving a Modern European menu. An outdoor terrace and large windows look out over the river, and there’s a fireplace inside for winter.

The Warwick Castle, meanwhile, has been going strong since 1867. The Grade II listed space features stained glass and wooden panels. Why not stop for a warming glass of something in front of the log fire before venturing to nearby Abbey Road, made famous by The Beatles’s eponymous album cover depicting the band walking over a zebra crossing? Neighbouring Abbey Road Studios, the world’s most famous recording studio, has been championing huge talent since 1931.

Prepare to duck and dive as you manoeuvre your way around the beautiful Prince Alfred pub. A combination of mahogany and engraved glass is a marvel of its late Victorian craftsmanship. Cosy up in a cellar booth and don’t forget to check out the pub’s biggest selling point: an Alan Turing plaque lies next door, commemorating where he was born. Turing was the father of modern computer science and famously cracked the Enigma Code during World War II.

Little Venice, with its canal-side walkways and beautiful neighbourhood streets, provides plenty of opportunities for a stroll. Why not work up an appetite with a long walk followed by lunch at The Summerhouse? This restaurant on the banks of the canal specialises in fish dishes. Try the seared scallops or crispy calamari.

Paddington Basin just down the river offers plenty of great things to do. Check out Pearl Liang, a stylish Chinese restaurant serving exceptional dim sum, meat and seafood dishes. Catch Heatherwick’s Rolling Bridge and Paddington’s Fan Bridge in action on Wednesdays and Fridays at midday. The Puppet Theatre Barge is a must for all the family; it travels down the Thames putting on shows and it’s usually moored at Little Venice.

Clifton Nurseries is London’s oldest garden centre and is just magical at this time of year. The beautiful glasshouse is brimming with flowers, houseplants and now, all things festive. After perusing the plants and blooms, why not pull up a chair and while away some time in the on-site Flotsam & Jetsam café? Indulge in brunch, cakes or pastries in the lovely surroundings of the glasshouse, set among the plants. There’s also a lovely shop, perfect for Christmas presents.

It may not be the time of year for cricket, but that shouldn’t stop you from visiting Lord’s Cricket Ground, located next to the well-heeled neighbouring area of St. John’s Wood. Take a tour and see the Grade II*-listed Victorian Pavilion, the renowned Long Room, the Players’ Dressing Rooms and the MCC Museum, home of the Ashes Urn. Tours operate seven days a week.

Just a short stroll up the road is Regents Park, named after Prince Regent (who later became King George IV). It features everything from formal gardens to sports facilities, a wetland area and playgrounds. If you feel like taking in more of the sights, amble down to Primrose Hill, where you can witness a stunning view of the city skyline.

For a fun day out with the kids, ZSL London Zoo will tick all the boxes. Come face to face with more than 700 animal species including lions, tigers, reptiles and spiders. There are many experiences you can enjoy, too, such as feeding penguins or gorillas. Both exciting and educational, it’s the ideal family treat.

previous
Review: My Neighbour Totoro
next
What's on at Tate Britain and Tate Modern?