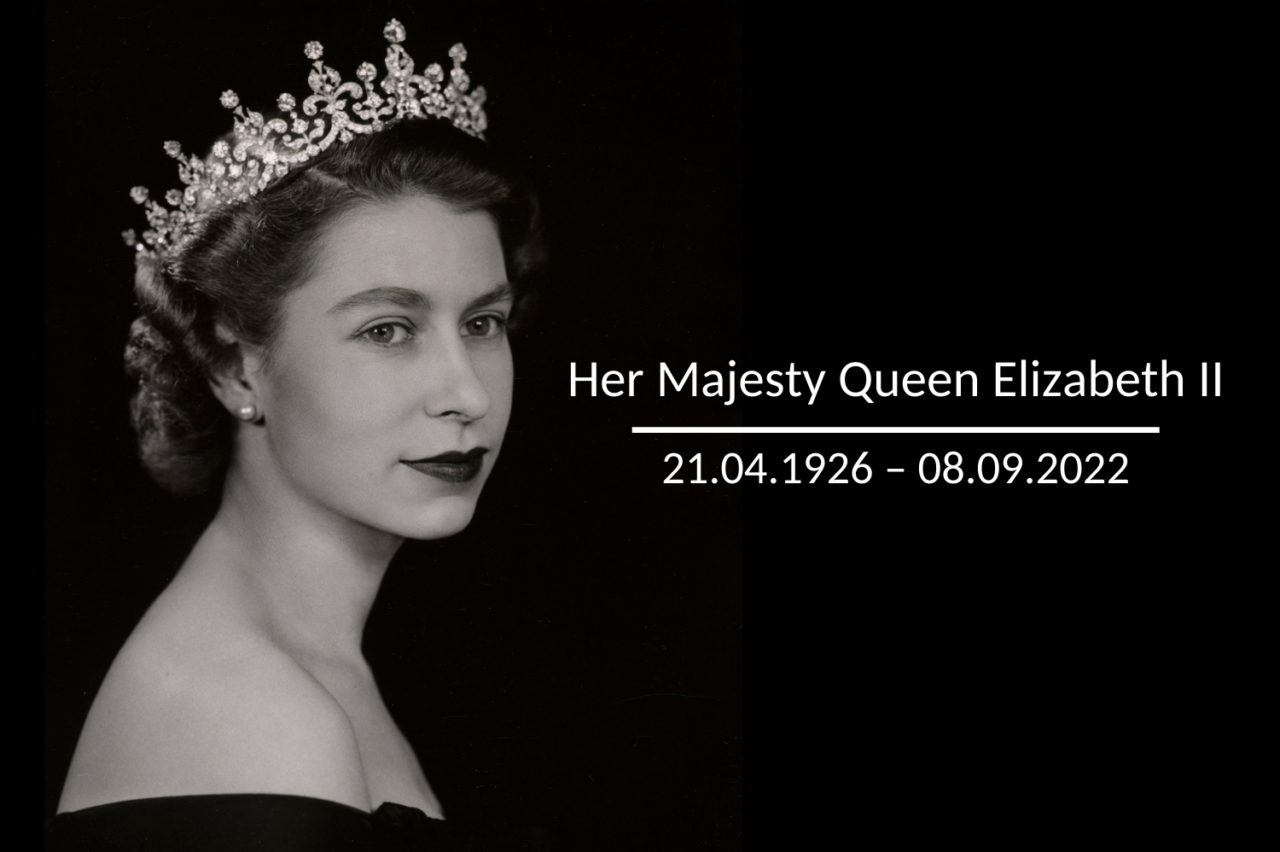 The state funeral for the late Queen Elizabeth II, who passed away in Balmoral last week, will take place in London on Monday 19 September. Find out where to watch the ceremony and what it means if you’re visiting the capital

The State Funeral of Her Majesty The Queen will take place at Westminster Abbey on Monday 19 September at 11am. Until Monday, the Queen will Lie-in-State in Westminster Hall to allow the public to pay their respects.

Since Wednesday afternoon, members of the public have been forming an orderly five-mile queue (at the time of writing) in true British style. Snaking all the way past London Bridge, Tower Bridge and into Southwark Park in Bermondsey they await the chance to pay their respects to Queen Elizabeth II. The closed coffin, positioned on a raised platform, has been draped in the Royal Standard and topped with the Imperial State Crown, a wreath of white roses and dahlias and the Sovereign’s orb and sceptre.

Hundreds of thousands of mourners are expected to pay their respects 24 hours a day during the four days leading up to 6.30am on Monday, the day of the state funeral. The Government has released a live queue tracker for people to follow, for information on where to join the queue.

What will happen on the day?

On the morning of Monday 19 September, the Lying-in-State will end and the Coffin will be taken in Procession from the Palace of Westminster to Westminster Abbey, where the State Funeral Service will take place. At 8am, the doors of Westminster Abbey will open for guests ahead of the funeral at 11am.

Towards the end of the funeral, at 11:55am, the Last Post – a short bugle call – will be played followed by a two-minute national silence. The national anthem will bring the service to an end at about midday. The funeral procession will then travel through London from Westminster Abbey to Wellington Arch, where the Queen’s coffin will be transferred to the State Hearse before travelling to Windsor Castle.

At 4pm, the coffin will enter St George’s Chapel for a committal service, attended by a more personal congregation of around 800 guests. At the end of the service, the Queen will then be lowered into the royal vault and the Sovereign’s piper will play before a blessing and the singing of God Save the King. The performance by the piper at Windsor was something the Queen had personally requested, Buckingham Palace said. That evening, at a private family service, the Queen will be buried with her late husband, the Duke of Edinburgh, at the King George VI memorial chapel.

Where to watch the ceremony

Hyde Park: There will be a big screen to watch from in the Royal park next to Buckingham Palace. Entrance to the viewing area will open from 11am.

Cinemas: Curzon, The Arc and Vue have said they will be screening the event for free. Other cinemas including Odeon, Cineworld, Picturehouse, The Light and Showcase, however, will all be closed on Monday out of respect to the Queen.

At home: There’s no need to brave the crowds as it will all be broadcast live on BBC One, BBC News and other major news channels such as Sky News and ITV.

If you are planning to travel to London, Tube and rail are a good way of getting around the capital, although some stations may be very busy. Walking is often the best option to get around, although please expect crowds and road closures. Plan ahead and allow more time for journeys in and around London.

Tube trains will run normally, though some stations will be busier than usual and short-term safety measures such as queing and closures may be necessary. Westminster, Green Park, Charing Cross, Embankment, Victoria, Waterloo, St James’s Park, Lancaster Gate, Hyde Park Corner and Marble Arch are busier than normal. Green Park station is open for exit and interchange only between 10am-8pm. It remains open for accessible journeys only. Night Tube and Night Overground will run on Friday 16 and Saturday 17 September.

On Monday, Tube services will start at around 5.30am and will run for an extra hour in the evening to support customers leaving central London. Westminster station will be interchange only, St James’s Park and Hyde Park Corner stations will be closed and Marble Arch station will be closed from 1pm. Please check details and status updates before travelling.

Parts of London will be very busy. The Westminster area will be exceptionally busy from Wednesday 14 September onwards. Walking journeys may take longer due to crowds and road closures. Use the TFL Central London map to get around.

previous
What's on at the Design Museum?
next
First look at London's biggest immersive art experience